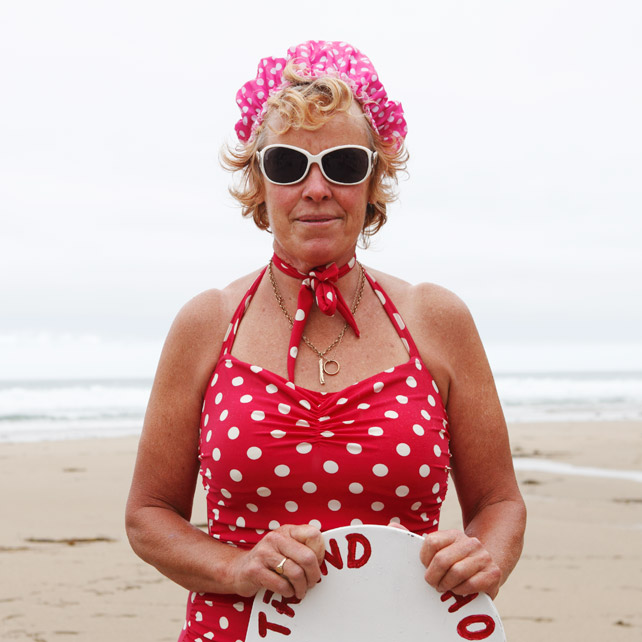 Hundreds of competitors from around the globe made the pilgrimage to the small cove of Chapel Porth, near St. Agnes, on the north coast of Cornwall on the 2nd Sept, for the annual World Bellyboarding Championships. Free to enter, the contest is organised and hosted by the National Trust and takes place on the 1st Sunday in September each year.

For the first time in it’s 10 year history (2012 was it’s 10th anniversary) the organisers had to cap the number of entrants at 360 as the event, and indeed the sport has grown in popularity.

All you need to compete is a piece of wood that’s less than 5ft in length, no wider than 2ft and no more than a quarter inch in thickness. And, preferably, a vintage bathing costume. Not to mention a thick skin as the water and weather can be a little chilly (and wetsuits are banned).

The event was started by local lifeguard Martyn Ward and surfer Chris Ryan in 2003, when about 20 competitors gathered for a memorial contest to Arthur Traveller, a Londoner who regularly visited Cornwall to bellyboard the waves of Chapel Porth, whatever the weather.

The championships now include an international field who compete in heats in three age categories for each sex, the youngsters (under 16’s), juniors (under 60’s) and the seniors (over 60’s). Heats of 10 mins duration, with up to 10 people per heat, identified by bathing cap colour. While entrants may catch as many waves as they want in the time, only the first 10 are scored.

So, while the emphasis is on fun, there is a world title at stake, so the judges analyse the following elements when scoring waves: The length of ride. Directional changes with flow, wave speed & glide. Innovative & progressive manoeuvres. Style, finesse & enjoyment.

Prizes are awarded to the World Champion, (the highest point scorer of all the categories), the 3 highest scores in each category, the King Arthur Challenge Cup (best traditional rider) as well as for many other achievements, including the Best Board Finish, Best Board Patina, Best Board Paint, Best Board Artwork, Best Vintage Board, Longest Ride, Most Stylish, Best Trick, Spirit of Belly Boarding and the Longest Distance Travelled. The top three Men & Ladies Swimwear and lastly, Best Swim Hat!

Whilst it’s not the winning, but the freezing to death on the beach that counts, congratulations to the new World Bellyboarding Champion, James Holman!