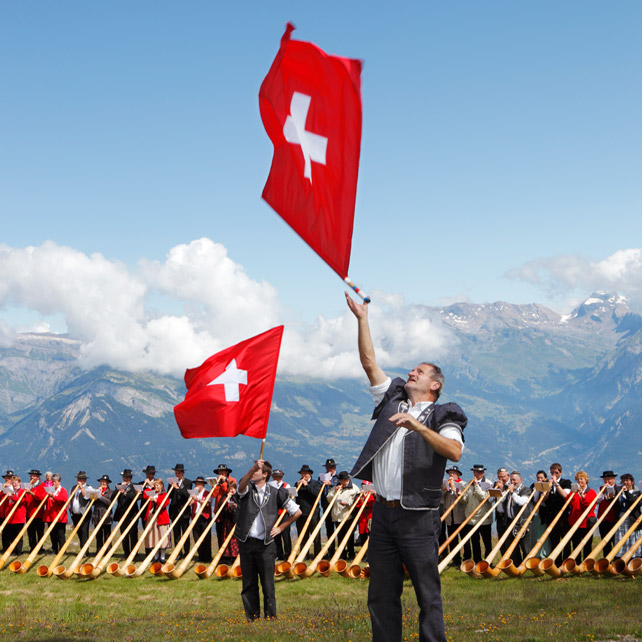 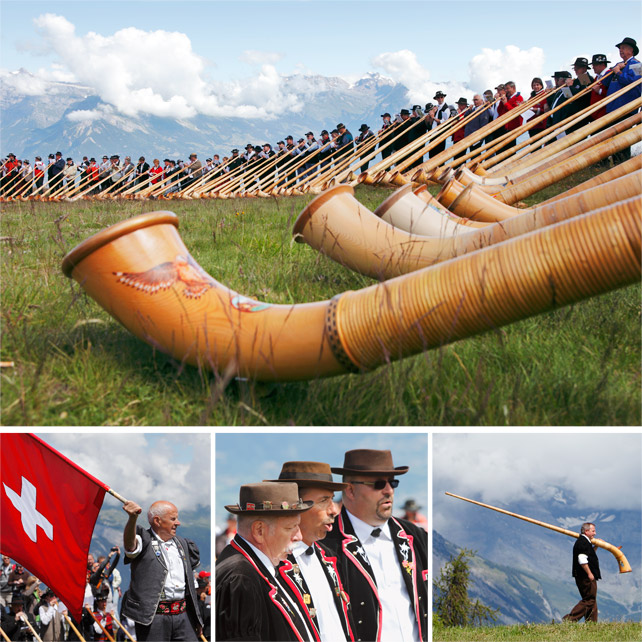 The 11th international alphorn festival of Nendaz took place in the canton of Valais in Switzerland on the 20, 21 & 22 July.

The Festival is a musicians meeting place, with an official alphorn competition, concerts, yodelling, performances by folk groups, traditional dances and spectacularly, the â€˜morceaux d’ensemble’ (with over 150 players). In short, it’s a festival dedicated to tradition and folklore, with spectators and participants coming together from all over France and Switzerland.

There were 70 entries into the competition, divided into 6 categories (for the under 16’s, solo musicians, groups & those who had won or previously gained a certain number of points etc.) All judged by the same long, (& often technical) list of criteria, which I won’t go into, but which includes the accuracy of breath, sound quality & musical expression. Whilst playing for between 2 mins 20 secs to 4 mins long to a jury hidden in a tent with no knowledge of who is playing. With the exception of the young, large cash prizes for the top 5 places were up for grabs in all of the other 5 categories ranging from CHF 750 (£500) for the winner to CHF 150 (£100) for 5th place. Following these competitions the best 5 solos and 5 best groups from all categories are then asked to compete for the trophy of overall champion, which was won by previous Swiss solo champion, Hans Matt.

Competition aside, it was the â€˜morceaux d’ensemble’ with so many alphornists directed together in spectacular harmony, in a semi-circle around flag throwers, at an altitude of 2,200m on the mountainside above Nendaz that really blew me away. It’s not something that words or photos can describe.

Click here to go to Vimeo for a short video I made if you’d like to see and hear a little of the musicians in action, but you really have to be there in person to experience this one in all it’s glory… go!