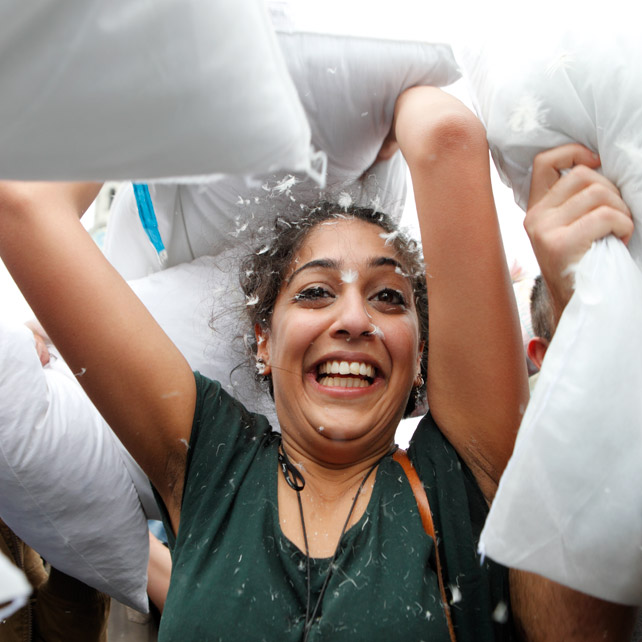 Hundreds of people descended on Trafalgar Square last Saturday for a massive pillow fight. Taking place each year on April 5th in cities right across the world, it’s become an international event, a flash mob of sorts.

While Trafalgar Square itself, coincidentally, happened to be closed off to the public for ‘maintenance’, the fluffy battle took place on the North terrace, in front of The National Gallery (which proved to be a good vantage point until all access was closed off there too). No matter, all the buskers and ‘human statues’ that line the terrace for the tourists attention packed up to make space, and one or two even got stuck in!

Starting at 3pm and lasting a couple of hours, the atmosphere was incredible. Not one dull face in sight as laughter and smiles took over the streets. Many bemused passerby’s and tourists who had no idea what was going on, saw what good fun everyone was having, and not wanting to miss out on the best entertainment of the day, ended up getting stuck in themselves.

Judging by the amount of feathers that covered the street like snow, there would be a few people going to bed that night without much more than a pillowcase to rest their weary head, and if my experience was anything to go by, quite sore eyes, but it was well worth the irritation. Brilliant fun, I hope the police accommodate it again next year!