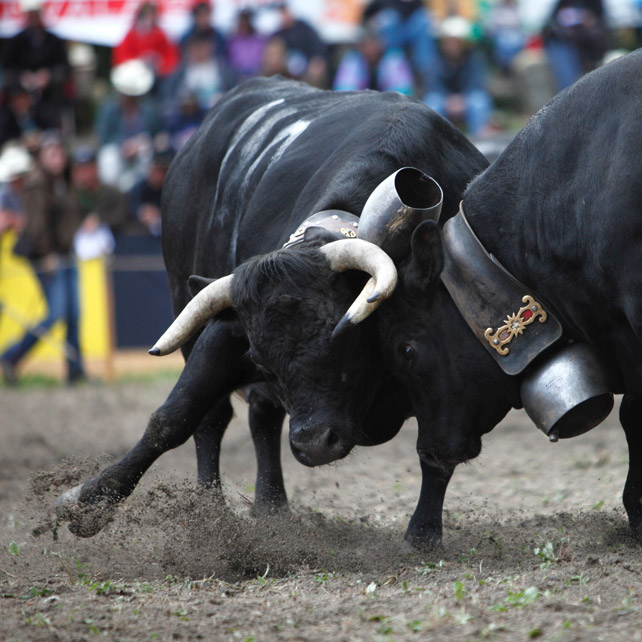 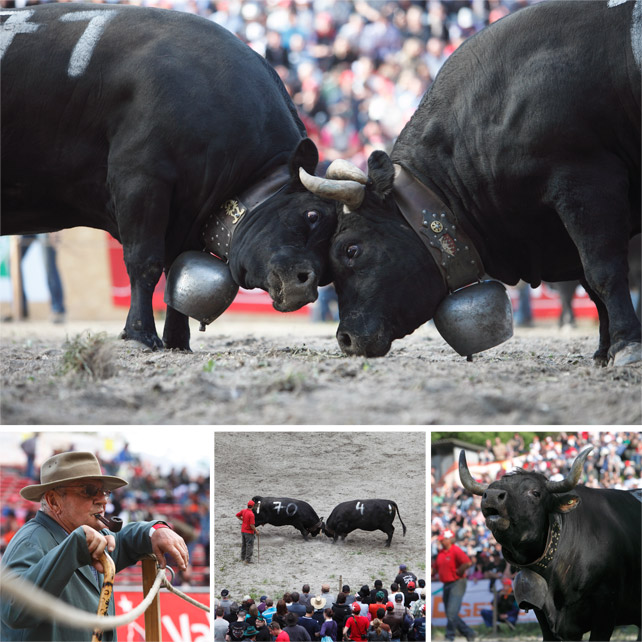 They’re named after the alpine Val d’Hérens region of Switzerland. The black, brown or dark red coloured cattle are very muscular and have short and broad heads sporting strong horns. The breed is unique to the alpine regions.

Cow fighting is said to have originated when the villages of the Valais region used to get together to see whose cow was the most suited to lead the herd up to the summer pasture, but it’s a far more serious business now with farmers breeding the animals specifically to fight for the kudos that winning the title gives rise to.

In their herds the cows instinctively challenge each other to establish a hierarchy, fighting each other pushing forehead against forehead in duels. No one wants their cows to get hurt so to minimize injury the horns are blunted and there are men in the ring called ‘beaters’ who keep a close eye, and step in to separate cows when required.

Different weight cows fight others in their category throughout the weekend, many in a ring at the same time with the jury noting which cow has retreated from each duel, which get knocked out. The cow undefeated after the series of duels is crowned the winner.

In the last contest of the weekend all the winners come face to face for the final that sees the crowning of the ‘Queen of Cows’. Victorious, though not without controversy this year was ‘Schakira’, from category 1, the heaviest/oldest/bossiest group. ‘Manathan’ the 800lb favourite, and queen of 2009 and 2011 was dethroned during the 1st category fights, clearly having a bit of an off-day!

There is a a documentary film “Combat de Reines” by Nicolas Steiner in Swiss cinemas now, it’s well worth watching the trailer, and the film, I’m sure, if you’re in Switzerland: www.combatdereines.ch