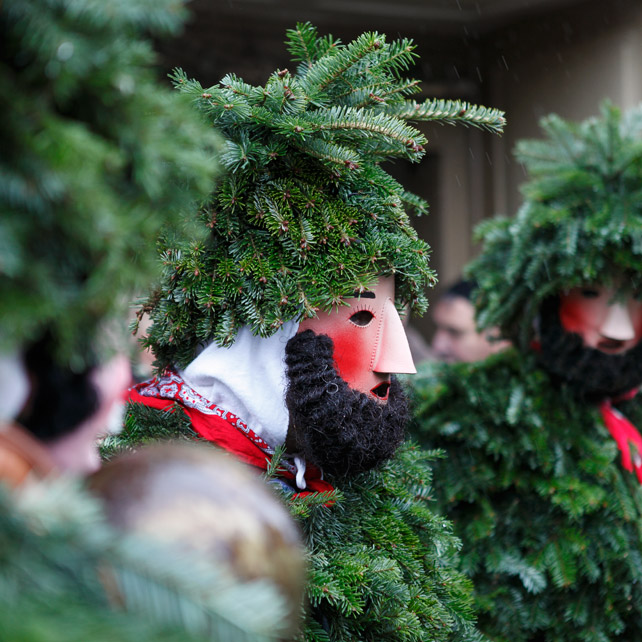 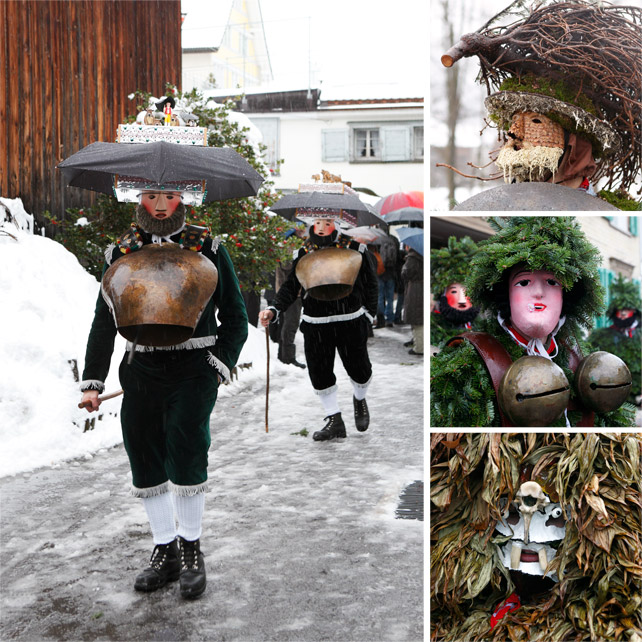 New Years eve is celebrated in a very special and unique way in many villages in the Swiss canton of Appenzell, but only in UrnÃ¤sch do they celebrate it again on January 13 (New Year’s Eve, according to the Julian calendar). The tradition of chlÃ¤use, a custom over 200 years old has developed from simple begging in disguise, into an expression of creative handwork.

The ChlÃ¤use wear robes and masks which require a great deal of time and effort to make, each of which falls into one of three very different categories: the SchÃ¶ne (beautiful), who wear richly decorated headdresses with figures and scenes of rural life, the WÃ¼eschte (ugly), who wear natural disguises in the form of pine branches, moss, and frightening masks, and the SchÃ¶-WÃ¼eschte (less ugly), who use the same materials for their disguise as the “ugly ones” but look less so.

From early morning to way past midnight the ChlÃ¤use wander around in groups of six (occasionally up to twelve), stopping at farmhouses and places where they know they will be welcomed to wish the families a prosperous year. When they arrive, they stand in a circle and ring their bells in a special ritual. Once greeted by the inhabitants they begin singing an almost sacral sounding yodel. In return, they receive small gifts of money which help to cover the cost of the costumes and a drink, usually GlÃ¼hwein.

Although some are dressed as women, only men take part as it is physically very hard work. The complete outfit (including thick clothes, bells and hat) often weighs more than 30kg, and in a day a group easily walks up to 10km. As well as being fit, a good voice is very important so that the group sing in harmony. Those that take part often come from farming families who have practiced the custom for generations and have these special sounds and rituals in their blood.

The whole village resounds to the rhythm of cow bells and yodeling, and is incredible to witness, whatever the weather!