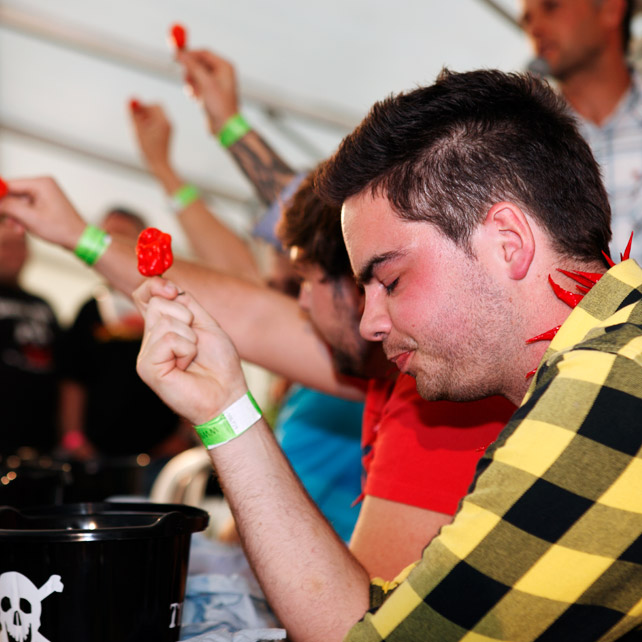 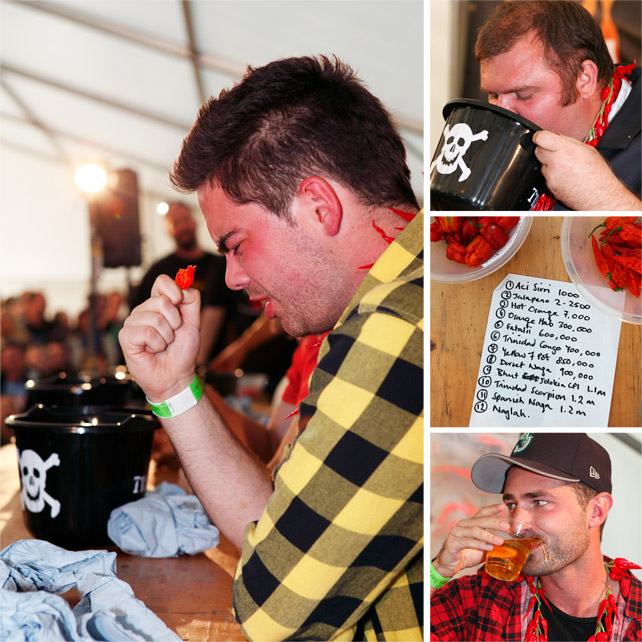 Fiery Foods’ Chilli Festival took place this weekend in Victoria Gardens in Brighton. Back for a 4th year, it proved to be bigger and better than ever, with new exhibitors, live music, cookery demos, lots of chilli plant, fruit and product competitions, not to mention the infamous Chilli-Eating Contest which is held over both days.

Not one to be taken too lightly, now I’ve witnessed it. You have to reserve your place at the table well ahead of the weekend because there’s a limit of 15. Of course not everyone who signs up online actually dares to show up. It would seem that some of the warnings on the side effects document, health questionnaire and disclaimer do eventually put them off.

Happily there are plenty of reserves who eagerly fill their shoes to make up the numbers, ignoring the possible side-effects, which go something like this: “1) Burning Mouth. 2) Sweat on face. 3) Reluctance to eat chilli due to sense of self-preservation. 4) Stomach churning. 5) Uncontrollable dribbling. 6) Shaking limbs especially leg – sign of agitation. 7) Increased pain along the alimentary canal. B) Eyes streaming – red eye. 9) Naga claw. 10) Sense of impending death (not really!)” What on earth is NAGA CLAW?

One by one the chillies get hotter and the contestants fewer, to the point on Saturday where 2 men remained. Both had eaten the full line up of the 12 varieties of chillies on offer, (with names like the Fatalii, and Trinidad Scorpion) including the hottest of all, the Naglah. But it was Reuben, pictured here in the yellow check shirt, from New Zealand who ultimately took the title, as he continued to munch his way through one more mighty Naglah than his opponent.

What a man, what a contest!