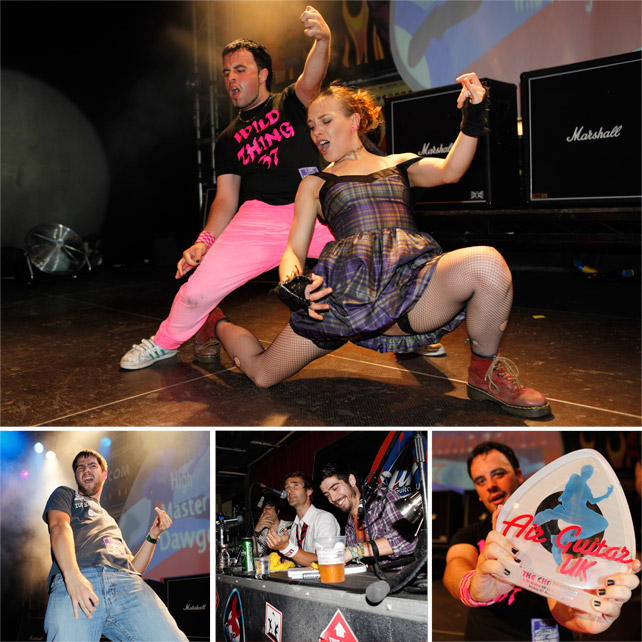 The cream of the British Isles fought it out for air guitar supremacy on Friday night at the O2 Acadamy in front of a huge crowd and an esteemed judging panel of two-times UK winner Gabi Matzeu (aka The Hoxton Creeper), two-times World Champion and UK founder Zac Monro, and John Georgie who founded Air Guitar Scotland.

Now in its fourth year, the electrifying contest, which is open to all and hotly contested, is a real test of skill and allows ordinary people a real taste of rock stardom. The winner, not only receives a beautiful brand new Gibson air guitar, but a prize ticket to fly the flag and represent the nation at the Air Guitar World Championships in Finland in a couple of weeks.

Judges were looking for three things in the performances: 1) Originality. 2) The ability to be taken over by the music. 3) Stage Charisma & presence. 4) Technique and technical ability. 5) Attitude, and last, but by no means least, 6) ‘Airness’.

These were clearly qualities that led ‘Wild Thing 37’, Thom Wilding, to victory in his fourth attempt at the title, having been placed 2nd, 4th and 2nd in previous years. He performed a medley of tracks for his chosen piece in the first round, but was then given a couple of unknown tracks to perform to in the 2nd round and the ‘Air-off’ final against ‘A Boy Named Sue’, with all performances limited to 60 seconds.

Wild Thing – you make everything groovy – so come on, make us proud!